Why bars are making their own branded spirits
by Oli Dodd / 23 November, 2022 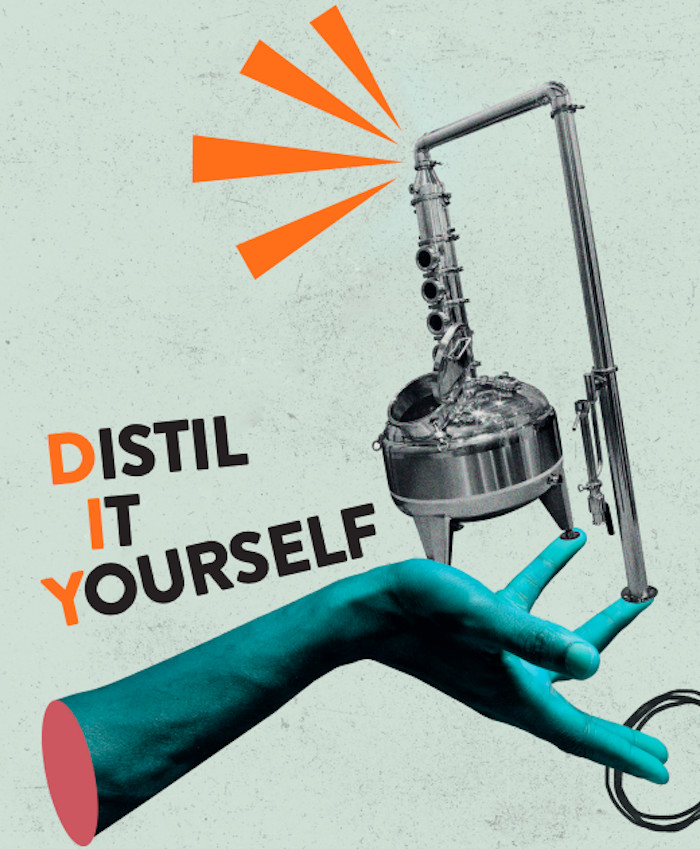 More cocktail bars are creating their own ingredients – often including a branded spirit. Oli Dodd reports

It’s becoming increasingly common to open a cocktail menu and see ingredients lists packed with a bar’s own creations. Depending on the style of the bar you’re sitting at, this could be the homemade distillate of an exotic ingredient that you couldn’t pick out of a line-up, but increasingly, it’ll be an own-branded spirit, and in most cases, that means gin.

The Connaught launched its own-label gin in 2020 and, as you’d expect from the quintessential luxury bar, it’s pretty premium. The team re-distils neutral grain spirit, with Amalfi lemon peels “distilled at the peak of spring”, Bordeaux wine for mouthfeel, juniper that is crushed by hand and everything done in-house.

“[It’s] a true labour of love,” says The Connaught Hotel’s director of mixology, Ago Perrone. “From sourcing the ingredients to re-distilling, diluting, and resting the blend, through to the very bottling and labelling stages, we do everything at The Connaught. This doesn’t allow mass production, but the scarcity and authenticity of our gin make it truly special to our customers.”

This soup-to-nuts approach gives Perrone and his team ultimate control but at the cost of any convenience. “From a logistics point of view, the challenges revolve around operations and space,” he says. “From our perspective, it wasn’t [easy] to set up a suitable space within the premises of our hotel that allowed for the re-distillation process but also storage for ingredients and bottling items. But, using our creativity, we overcame the challenges, and the result is not just a great liquid, but it’s the essence of our bar”

This technique of re-distilling neutral grain spirit with botanicals to produce gin is known as rectifying and it’s the most common way that gin is made. The soon-to-be-opened Callooh Callay site in Covent Garden will also feature a rectifying room where own-label gin will be made.

“We won’t produce and distil spirits from scratch, there are plenty of people who do this full time and still don’t get it right,” says Callooh Callay founder Richard Wynne. “We have a rectifier’s licence where we take a neutral grain spirit and can then macerate and re-distil it through a small pot. It’s a simple process that takes a few hours and can easily be replicated by a small bar.

“Would we replace our house gin with our own product? Not yet – but I wouldn’t rule it out in the next five years or so. But if you want to put on a masterclass for £100 where guests walk away with their own bottle then it’s definitely worth the investment.”

That a bar’s own spirit would be chosen by a guest ahead of a traditional brand speaks volumes to the way in which bars and their tenders are now viewed by consumers.

“People know that whatever they are coming in for, whether it’s a new house gin or ice cream that they can trust, it’s awesome and if there is a problem our team can take care of it,” says Wynne. “We have a very eclectic crowd, and they are always willing to try new lines or products.”

Merch, RTDs and cocktail kits have extended the brand power of bars beyond the small circle of regulars.

“Bars are very much becoming brands in and of themselves,” says Chris Tanner, general manager at Silverleaf. “What a bar represents is so much more these days and there’s a lot to be said for that consumer trust.

“One thing the lockdown did was allow somebody in a small village in the Peak District to be able to get a mezcal subscription just out of curiosity and explore wild agave and have a kind of bar experience. Now we’re in this position where if we are able to produce proprietary spirits, there’s more reach to these people who want to experience bars.”

Not all bars will be motivated to create their spin on an existing spirits category, and for the experimenters cut from the same lab coat cloth as Dave Arnold and Ryan Chetiyawardana, the options for distillates are broad.

“I don’t want for us to be a bar that distils or ferments arbitrarily, it must be in the pursuit of something,” says Tanner who, alongside Liam Broom, has created a library of homemade distillates and flavours for use on the menu.

“Sometimes, we want to use an ingredient that may not exist in product already,” explains Broom. “On our menu we have two distillates, one is heartleaf and the other is kombu, neither of which are available to buy in spirit form, so we use distillation to get those flavours into the drinks.

“We have a lab down in the basement, which we use to ferment, distil, clarify and whatever other modern techniques are required,” he continues. “But the vast majority of bars don’t need all of this equipment to do everything.”

For most bars, it simply isn’t practical to allocate precious floorspace to be used as a lab, still, or bottling facility but that doesn’t mean distillation is out of the question.

Contract distillers and bottlers such as Charles Maxwell’s Thames Distillers can be a solution for bars which simply need to provide a recipe and wait for delivery.

It’s the way that perhaps proprietary spirits’ greatest success story was born. Portobello Road Gin No.171 was created by Ged Feltham, Paul Lane and Jake Burger in a 30-litre copper pot still above the Portobello Star in 2011, but until 2016 its production was handled a few miles south in Clapham at Thames Distillers.

For the more experimental there are options too. In 2017, Stu Bale founded Crucible, a lab in north London that made expensive equipment like centrifuges and rotovaps more accessible to bar teams.

“Crucible meant that the barrier to entry for distillation has been diminished,” says Tanner. “At some of our other sites in the past when we wanted to make our own distillates, we would just pay Crucible for the space. It democratised it all and I think we’ll see more bars making their own stuff and I really hope we do as well.”

Small batches from Thames Distillers or creations from Crucible aren’t going to put traditional brands out of business, and Callooh Callay’s thousand bottles a year won’t do much to Beefeater’s bottom line, but the approach has opened the door to a different mentality, one that’s less plug and play and more bespoke.

“I don’t want to diminish the value of brands,” says Tanner. “I want to find a way to collaborate and to work with brands to harness a bar team’s creativity and make great products. That's a really good thing, and I hope we see a lot more of it.”