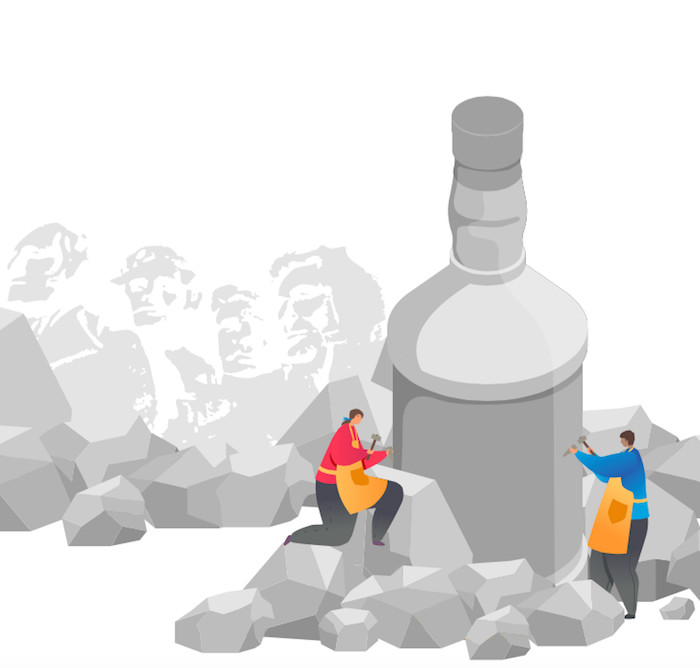 It looks like American Single Malt Whiskey is about to become a legal definition. But is this a good thing? Dave Broom sifts through the perceived pros and cons.

The scene: Binny’s Marcey Street branch, Chicago. March 2016. A blizzard blowing. Inside, nine American whiskey producers weretrying to define what American single malt was. Although a growing number of distilleries were making it (today, there are in excess of 170), there was no legal definition. In a matter of a few hours, the American Single Malt Whiskey Commission [ASMWC] was established and five rules created.

American Single Malt Whiskey should be:

• Mashed, distilled and matured in the US

• Matured in oak casks of a capacity not exceeding 700 litres

Now, five years later, it seems possible that the Alcohol & Tobacco Tax and Trade Bureau (TTB), the US government department that oversees issues such as labelling, will give its approval to the definition. Five years might seem a long time, but Steve Hawley, the ASMWC’s president (and marketing director of Westland Distillery) was sanguine, pointing out that the TTB reviews nearly 200,000 label submissions per year and, as a government body, is constantly buffeted by political winds. Anyway, as he says, “whiskey makers are practiced in the art of patience”.

The producer-led initiative pre-empted the possibility of stricter regulations being imposed by outside elements, as well as preventing potentially confusing practices.

That said, not all producers are happy with the move. Lance Winters is the master distiller at California’s St George distillery, one of the first to make single malt in the US. While accepting there was “a not-unreasonable fear” that bodies outwith the industry may define the category, “and thus poison the well for thoughtful producers of whiskey”, he was staying out of the movement.

“It’s my opinion that the category is still young, and would benefit from more experimentation and exploration before we put a fence around it and raise a flag. Will we ever label a product American Single Malt? Probably not. We prefer to have more flexibility in what we do.”

It’s no surprise that there are dissenting voices. The discussion around spirits legislation is neverending. They’re too restrictive, or they’re too loose. They are needed, they should be scrapped. I’ve heard every argument – mostly the lazy one which claims that scotch regulations prevent innovation.

As far as I can see, the (apparent) lack of innovation within scotch hasn’t been down to the rules, but a restricted mindset, itself the product of a century of hegemony over the category.

In fact, although there will always be some chafing about aspects of any regulatory framework, I’ve found that distillers welcome definitions. You only have to look at how the lack of a legislative structure for Japanese whisky resulted in obfuscation, and outright deception, and how the category has subsequently been damaged.

Although Ireland’s new whiskey distillers are justifiably concerned about an overly restrictive definition of single pot still, none of them reject the fact that a definition of Irish whiskey is required.

At its core, legislation creates trust between the consumer/retailer/bar-owner, and the producer – again, see what’s happened to Japanese whisky. As Jared Himstedt, head distiller at Balcones, argues: “If there isn’t a definition, then consumers can’t use the term in any significant way. An agreed-upon definition helps everyone use the same language.”

And yet, in the words of musician Steven Stapleton: “Categories strain, crack and sometimes break, under their burden.” Artists, he urged, should “step out of the space provided”.

The creative space lies off the main path, yet the consumer needs reassurance. Does the creation of boundaries force everyone into the middle of the road? Winters feels so. “Categories are a double- edged sword,” he says. “They help shop-keepers [and bar-owners] know where to slot a product, and a consumer to locate one, [but] as someone who looks at distillation as a form of self-expression, I prefer to say, keep your laws off my distillery.”

This idea that legislation hampers innovation is rejected by Hawley, who argues that “within the structure there is a seriously staggering amount of innovation possible”, while Himstedt believes most distillers “will keep doing what they have been, exploring interesting mash bills, local and heirloom grain and wood species, new smoking techniques, etc”.

Maybe definitions are required because we all need something to push against. The intellectual challenge is finding those points of flex. Even distilleries which claim to be beyond categories have self-imposed practices which act as a form of definition.

American single malt needs to be defined. Its various meanings will, however, be the result of how creative distillers are in challenging the boundaries they have imposed. The battle, as ever, is less with legislation per se, and more with mindset.